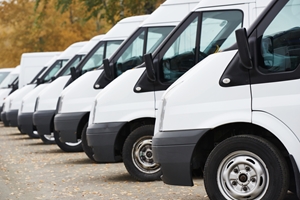 If you run a business that involves the use of vehicles, such as a construction firm, plumbing enterprise or anything else that requires four wheels and an engine, you'll understand how vital your automobiles are to your organisation's continued success. Commercial vehicles, whether you own just a single work van or a fleet of diggers, are a vital part of your business, as they allow you to carry out work to best effect, be it transporting tools, excavating tunnels or transporting waste.

It makes good sense, then, to look after your commercial vehicles as best you can. This part of your business can often be overlooked, with vehicles left neglected outside once the time to clock off has come. Often, this can be to their detriment, as they'll be left exposed to the full force of the Australian elements, not to mention opportunistic thieves looking to steal your hard-earned livelihood.

Not to worry – at Shed Boss, we can put together an industrial shed that's large enough not only for one vehicle, but an entire fleet of them. Read on to find out how to best protect your commercial vehicle via the power of sheds!

Keeping your commercial vehicles shielded from the elements should be one of your top priorities when examining your fleet. The hot Australian sun has the power to quickly fade paintwork, as well as ruin any interior furnishings via UV radiation. You might think that rain is less of an issue for your vehicle's bodywork than the sun, but those drops actually pick up pollution and other dirt as they fall – right onto your machine. Additionally, vehicles that are continually left out in the rain are more liable to rust which, of course, can destroy paint.

Keeping your commercial vehicles shielded from the elements should be one of your top priorities when examining your fleet.

It's not just the weather that can damage your cars bodywork on an aesthetic level. Birds have a habit of finding the shiniest vehicle to do their business on and, though this may seem nothing more than a small annoyance, droppings are actually acidic. Hence, not only do they look awful, they can make a real mess of your vehicle's paint. This can markedly affect resale value.

Vehicle theft remains a big problem in Australia. According to the Australian Institute of Criminology, the country has one of the highest rates of automotive thievery on the planet. To illustrate this, the Australian Bureau of Statistics states that 54,400 households reported their vehicle stolen over 2013-14. Those numbers are alarming enough, but consider this – there were nearly 260,000 instances of items being taken from vehicles over the same period. These items ranged from work tools, right through to larger objects such as cement mixers and chainsaws – expensive things that cost a great deal to replace, especially if not insured.

Vehicles that were targeted were largely parked on an open driveway, or in the street. Vehicles locked in buildings, such as an industrial shed, were barely touched. Therefore, investing in a custom-designed shed is something of a no-brainer when it comes to looking after your commercial vehicles. Let's take a look at the sort of building Shed Boss can offer you.

At Shed Boss, we can deliver you peace of mind with a shed that's just perfect for not only parking up your vehicles for the night, but storing valuable work tools, too. Our sheds are 'built strong, and built right', massively secure, and can be designed precisely to your liking with the Shed Boss app. Perhaps you're only looking for a single bay, or you need multiple ones – it's completely up to you! Will you opt for roller or hinged doors? Either way, you can be sure that your shed will keep your commercial vehicles in tip-top condition and safe from thieves for years to come!