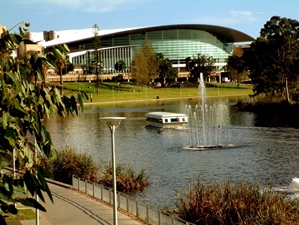 Hello, South Australians! All of you should be patting each other on the back, because over the last few months your state has won many international awards on sustainability and environmental friendliness.

Recently, SA ranked top in the world for the most houses with rooftop solar power, according to a report by the Energy Supply Association of Australia (ESAA). Let that sink in for a moment. Number one on the entire planet! SA also came in second place for the most combined wind and solar energy usage per capita, just behind Iowa in the United States of America.

South Australia targets for 50 per cent renewable energy by 2025.

"More than one in seven households now have solar PV systems mounted on their roofs, which is a 15 per cent penetration rate. South Australia [has] 25 per cent [of] households with solar on the roof and some suburbs in Adelaide [have] more than 50 per cent of their rooftops covered in solar panels," said Matthew Warren, chief executive of ESAA.

This positive news ties into your state capital Adelaide's goal of becoming the world's first carbon-neutral city. That's not to say the entire state itself isn't keen on being green – rather, SA as a whole aims to hit a target of 50 per cent renewable energy by 2025.

So, SA residents, if you are interested in custom-designing a shed or barn, do your state proud by using the green design ideas listed in this article. You can incorporate these features during your planning stages on the Shed Boss app.

Did you know the Adelaide City Council has pledged up to $5000 in funding for home owners and businesses interested in using solar photovoltaic panels and battery storage? If you're planning to build a custom commercial shed or residential shed as a dwelling, you could apply to this scheme.

Our skillion roof, also called a mono pitch roof, is particularly good for installing solar rooftop panels because it slants on just one side and you can pick the angle of the slant, too. This means you can precisely match your bespoke skillion roof size, shape and slant to the solar panels.

Not only can you benefit from this financial offer as an Adelaide resident, but you're also helping the Earth overall, and some research claims the economy too. Indeed, research by the New Climate Economy (Global Commission on Economy and Climate) found that cities which have green planning or take sustainable steps can save the global economy up to US$17 trillion (AU$24 trillion) by 2050!

A green barn for the planet and animals

One of the Shed Boss extra features is adding rain water tanks, and rural SA farmers can choose this option for their barns.

This would be a smart way to preserve water and minimise waste, not to mention be efficient use of the water for providing fluids to farm animals such as horses. Another useful tip is to add turbine vents or roof ventilators to your barn. Here at Shed Boss, we can install whirlybirds to your barn so heat can be removed from the ceiling cavity.

Our structures are made of heavy galvanised steel, so they can get fairly hot in the SA sunshine. A whirlybird can manage this heat, and save you energy costs of cooling the interior.

Animals that live inside can also enjoy the cooler climate, which would make for a more ethical and humane treatment for them as per the National Dairy Industry Animal Welfare Strategy.

A green shed for home owners

Rather that use electricity for a shed that won't be used much at night time, simply add skylights to use natural lighting for illuminating the shed.

Similarly, using large glass sliding doors can help bring light into the shed so there's no need to use a bulb and unnecessarily waste electricity.

Of course, choosing energy star rated appliances is another handy tip, as these are industry-tested to confirm they use less energy than their counterparts.

These steps sound simple, but it's often the most straightforward methods that add up to create bigger ripple effects.

Overall, if everyone in Australia takes the time to choose green techniques of building and lived with energy consciousness, it won't just be SA leading the charge but the country as a whole.

Feel free to get in touch with the friendly teams at any one of the SA Shed Boss franchises for additional energy-friendly advice before you custom-design your structure.

We have franchises dotted throughout the state, so you can contact them directly via phone or by popping in store, or also get a quote online at your own convenience.