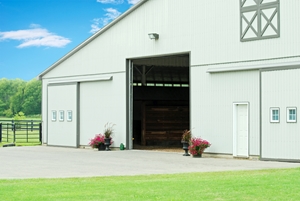 In our next in the series of Q&A items with members of the Shed Boss family, we speak to Gabrielle Hickerton, who is a fantastic part of the Innisfail community.

How did you start with Shed Boss?

We were in the construction industry for almost 30 years, and were approached by the then-owners of the franchise as we looked into being a franchisee through the newspaper.

We came on board in 2002 in Innisfail, and then we ran the business on our own, and then in 2005 as a partnership, taking on the Cairns branch as well. Innisfail is independent, while our partnership owns Cairns. We're running the show from Innisfail at the moment.

What is the standard project that you are generally asked to do?

Generally speaking, it is a good mix of residential with some commercial jobs. Lately not so much standard sheds, things are a bit different. We do awnings and extensions a lot now. I think this is because of the economic environment, things are tight so people want to hang on to what they have and improve it, to improve their lifestyle.

What gives Shed Boss the edge over others?

The quality engineering, and the fact that [the shed] has to be ShedSafe accredited. For Innisfail, we have been here a long time, people know us, our integrity, honesty and service we provide set us apart. We have a dedicated crew, some of whom have been with us for over ten years. We want to support the community as far as possible.

How long is the construction process?

It all varies because it depends on the project. Because we are also a construction crew, people often ask us to do liveable sheds, which can take as long as a house. Awnings tend to be a lot quicker depending on how they are fixed, but standard sheds usually take six to eight weeks from first contact to the final stages.

How large is the team overall at Innisfail?

We have four through [Innisfail], and also access people through our other business. We've had two crews going at stages in Innisfail who were on wages rather than contract. We even put some of them through apprenticeships!

Why was it important to put people through the apprenticeships?

We thought it was important that if we were going to put these boys on, they had to have proper training. It was difficult at first as they didn't have shed building or metal work apprenticeships, so we put them through these. One of our staff members in this began as an employee, then went to contract to make more money and work his own way. He has now come full circle to be a sales person in our office.

He has all this knowledge of building custom sheds, as well as sales now. He's also got so much confidence, and it is wonderful to see, and has also worked with our crew for a long, long time. We have a high standard of expectations and our own great working team, which is important.

I think that's our unique feature here. Most Shed Bosses have access to contractors, and it's not easy our way, with wages to pay. Things had to be squeezed a bit but we still maintained our core, which is very valuable. This consistency is important to us. We and John [Whitford] are very committed to the quality of the final product.

It's all about being there for the people, and the community knows who we are.