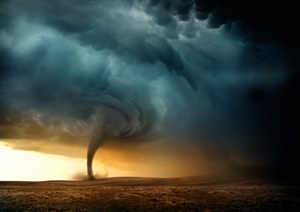 The phrase 'climate change' is one that's hard to escape in this day and age. It refer to the gradual warming of the Earth due to a number of combining factors, and this can bring with it a range of different weather types that we need to prepare for should global warming continue unchecked.

Your custom-designed shed is oone such thing to consider – but at Shed Boss, we like to think that our structures can stand up to anything the current and future Australian climate can throw at them. Let's take a look at how climate change could potentially affect your shed, and how you have little need to worry when you purchase a structure from the Boss!

How is climate change affecting Australia?

Australia is already a hot country, but it's only going to get warmer. The Australian Bureau of Meteorology's Annual Climate Report states that 2015 was the fifth-warmest on record, including several record-breaking temperatures from October through December. The year before that was the third-hottest since records began, and 2013 was the hottest of all. Each of these years are very recent, and though you may believe that the nation growing just one degree hotter, on average, over the last hundred years won't make much difference, you'd be wrong.

At Shed Boss, we like to think that our structures can stand up to anything the current and future Australian climate can throw at them.

Hotter temperatures could make Oz even more prone to swirling bushfires that already take hold each year across Australia. Additionally, it is thought that climate change could also be contributing to the ever-increasing number of extreme wind events in the country – an average of 13 hurricanes sweep across Oz each year. With the mercury rising and extreme weather events becoming ever more common, you may be a little worried if your shed is up to the task – but fear not, Shed Boss' structures can with stand almost anything, built strong and built right.

Shed Boss' constructions are crafted from galvanised steel, which is produced to the stringent Australian manufacturing regulations, meaning your shed is made from very tough materials. A shed manufactured in Australia must, by law, adhere to the ShedSafe™ accreditation programme, which was set up to ensure that the structure is of the highest standard, complying with the Building Code of Australia.

What's more, each of our sheds are built on a solid Zincalume® base to hold firm in even the strongest wind, with patented Morinda™ Glove Section Bracket System anchoring everything into place. Our range of COLORBOND® shades come equipped with a whopping 15-year guarantee, giving you further peace of mind – contact us to find out more about our super-strong sheds!